This weekend I shot Alison and Nate's wedding in Saratoga Springs- it was a horse-filled weekend with a wedding reception plus polo demonstration, followed by a Day at the Races on Saturday. It was so much fun! And Saratoga is such a beautiful and special place in the summertime. Those photos will have to come later... but in the meantime, take a look at one of my favorites from their engagement portrait. 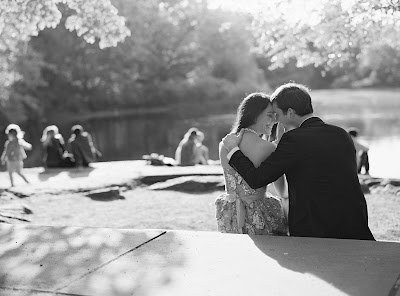 We took a handful of more posed shots, but at the end of our session I took a few just like this- the people in the background make it look like I've just caught a couple nuzzling in the park- and I kind of did! This shot was taken with my Contax 645, on color 400 speed film, then transferred to black and white in post.
Posted by charlottejenkslewis at 10:03 PM

charlottejenkslewis
Brooklyn, NY
I try to capture the beauty, romance, and intimacy in life.